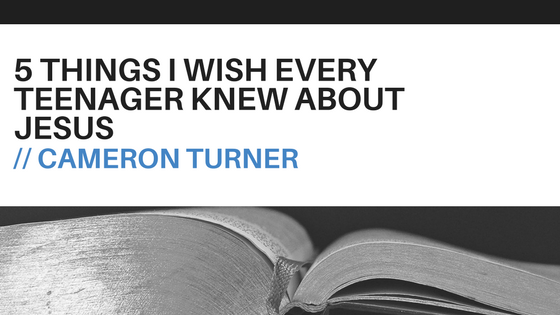 I went to a Catholic school for all of my primary and secondary education years.  While I had lots of fun and learned a lot, I wasn’t exposed to too many Catholic-Christians who would say their lives were 100% centered around Christ and the Church.  I was exposed to the Catholic religion in less of a hardcore way and in more of an academic way. The problem wasn’t the fact that it was a more theoretical approach to Christianity – the problem was I didn’t know there was more to know, or that Jesus was someone you could know personally.  I thought I knew everything about Jesus.  And so did most of my peers.

And so there were lots of doubts, and few of us felt compelled to follow Him.

So here are five things I wish I could tell teens about Jesus that would help them understand why some people are utterly convicted to live a life centered on Him, and why maybe they could consider stepping closer to Him as well.

In recent years, people have begun to question whether Jesus of Nazareth ever was a man who walked the earth, or if he was just some guy that people made up so they could start a fake religion and rule the world.  (Trust me, I’ve heard it all.)  I wish teens could know that while, for example, there about 50 documented records of the existence of Alexander the Great (whose authentic record no historian would ever question), there are more than 500 original, source-era documents recording the life and events of the man Jesus of Nazareth at the beginning of the 1st century.  And not just from Christians either – some from Jewish historians as well as Roman ones.

We have probably all heard someone (or ourselves) mention that Jesus may not be divine but he was certainly a good man and teacher who said some nice things about God.  The problem with this is that if you start to read what Jesus actually said it’s painfully clear that he asserted something MUCH greater about himself.  This means that Christianity is either false and all Christians are insane, or it is the fullness of truth, because of the authenticity of its founder, Jesus.

Here are just a few examples of what Christ said: “I am the way, and the truth, and the life. No one comes to the Father except through me” (John 14:6).  And then there was the time when Jesus was speaking with the Chief Priests.   Caiaphas the high priest asked him, “Are you the Messiah?  The Son of the Blessed One?” (Caiaphas was very aware that he was questioning the divine nature of the man in front of him.)  Jesus responded, “I am, and you will see the Son of Man seated at the right hand of the Power, and coming with the clouds of heaven” (John 14:61-62).

Who do you say that he is?

Do you know what are the first words out of the mouth of Jesus in the book of John?  In John chapter one, two people are curious about Jesus and so they start stalking him.  Okay well not really, but they approach him to see what he’s all about.  “What do you want?” he asks (John 1:38).  What do you want?  What are you looking for?  He does not begin by vomiting sermons at them to desperately try to convince them to follow him.  He humbly waits for them to come to him, and then kindly engages them in conversation.  He asks them about what are the desires of their heart.  He wants to get to know them, personally, individually.  These two men ended up spending the whole day with Jesus.  I hope teens know that Jesus can be very strong but he is also very gentle.  He respects your freedom and wants to draw the best out of you.

I started following Jesus when I was a teenager because I wanted to.  I follow him today because I still want to.  Sure, there are times when it’s hard to be a Catholic-Christian in today’s world.  But honestly, I find life with Christ, well, fun!  First of all, the people I’ve met because of being Catholic have been some of the most kind, loving, authentic, hilarious people I’ve ever met.  Second, I’ve been able to learn so much about myself because I’ve taken the time to just sit by myself, reflect on my strengths and weaknesses, and ask God what he thinks of me (turns out he thinks I’m pretty awesome).  Thirdly, I’ve been able to do things I never thought I would do because of my faith in Jesus.  I’ve been able to travel all of Canada many times, meet some incredible people, advance my music career more than I imagined, and fall in love with my amazing wife Sara.  Now, these might be particulars to me but I’ve met countless other Christians who would agree that the adventure of life with Christ has been pretty solid.

Whenever I only have a few moments to talk to a teen about Jesus, this is what I want them to know most.  I guess I would challenge a teen to stop for a minute and just think about it.  What if all this is true?  What if God really does exist?  What if Jesus is God-made-man and super relatable?  What if the crucifix tells a true story, that God was tortured and killed on an awful wooden Cross?  What does that say about me?

Alright.  In a nutshell, the Bible tells the story of how we all choose to make mistakes called sins, and that these sins owe a penalty.  All throughout time, humans have been trying to get rid of sin or offer up sacrifices to pay off this penalty because it keeps us from God (check out other religions with regard to this too).  The Bible explains that none of these good efforts were working so He came himself and offered himself as that sacrifice.  Basically, his love was so strong that it broke the penalty that was held over us.

It’s like you did something really bad that gave you a life sentence in prison.  Your friend was super sad because he wouldn’t be able to spend any time with you.  So, he pays the price it costs to get you out (let’s say it’s a trillion dollars).  How would you look at that friend after?  Would you want to spend more time with that friend? It’s the same with Jesus.  He would rather die than spend eternity without you.

So there you have it!  Five things I would love to tell every single teenager about Christ.  I hope that helps you understand Jesus better and why so many people believe in him, and want to live their lives in a context that is centered on him and his message.