“When God Destroys Your Foundations” -written by Sam Vail, Alumni 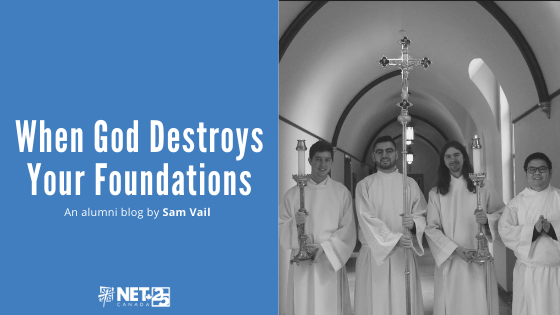 I grew up in a Catholic home in Prince Edward Island and attended a very small Christian school. Being a fairly quiet and shy individual worked out quite well for me since I rarely met new people and it kept me out of trouble. I was so quiet in fact, that one of my best friends, whom I met in junior high, after a week of interactions with me, though I was genuinely mute. One benefit of being quiet is the opportunity to listen and learn from the people around me, and it gave me a chance to listen to God fairly often as well. The excitement of a NET year never seemed like an option for a character like myself, but after one year of engineering, I realized that becoming a good engineer was not going to make me a good man, and I needed to radically shake up my static faith life.

NET filled my life with more purpose than it ever had before. I realized that I wanted to serve God and his Church for the rest of my life and I finally mustered up the courage to begin an application to seminary during my second year. I am now blessed to be in formation at St. Peter’s Seminary and discerning the diocesan priesthood for Charlottetown, PEI. The people of this small diocese have been such a blessing; I have received countless prayers and letters from them over the course of the year.

But I did not enter seminary the year after I left the road. I studied philosophy that year, and it challenged the very core of my belief in God in a way that no youth I met in ministry had done before. I thought that the apologetics I practiced and preached were ironclad, but a certain professor was able to effectively cast doubt into every argument I had for belief in God. At the same time, I had more time on my hands than I knew what to do with and had to look harder for purpose than I did on NET. It really shook the foundation of my life and it caused me to stumble a lot. After fighting and failing so often that year, I was no longer certain what the future held, but I knew my faith could never be the same. I was truly discouraged, scared, and saddened.

That year, I was told by a wise priest that Faith is a gift from God. A GIFT, is given, not acquired. …I then proceeded to blame my apparent lack of it on God, who must have ceased His giving it to me… but looking back now, I see he was giving me a stronger faith, one which I did not yet recognize.

Most life-changing conversion moments happen when a person realizes how far away from God they truly are. Conversion comes from Latin: to ‘turn’ and there is only need to turn when a person is gone astray. It’s at those moments, when Truth hits like a rock, that we are encouraged to turn our lives toward Him. And this challenging year held many of those moments for me.

God was destroying my foundations and making way for a rebuild of my faith in Him; one that is rooted more deeply in Christ. The old foundations were composed of too much of my own small ability and intelligence. I only had faith in my own imperfect knowledge of God. My conversion was to have faith in God himself. Realizing my shortcomings drove me to seek answers and take my discernment of priesthood much more seriously. Although I felt at first that this new philosophical world was like a prison of unanswered questions, sitting in it for a while has taught me more reverence for God as someone who is truly unfathomable. There is no way I could begin to explain the beauty of reading a good book. Books by Doctors of the church: Augustine, Aquinas, Francis De Sales. Philosophical books: Plato or Aristotle.  But most of all, the Holy Bible. Reading the letters of St. Paul now, I see what he means from a whole new perspective. The Truth you catch a glimpse of in a good book, is a glimpse of God Himself.  “You pray: You speak to the bridegroom. You read: He speaks to you” – St. Jerome.

“Faith is the assurance of things hoped for, the conviction of things not seen” – Hebrews 11:1 and each time I read the wisdom of the saints or the word of God I am assured. God’s providential hands placed me in a seminary, and I cannot think of a better place to read. I cannot thank Him enough for that.

In an age where reading, thinking, and praying are so rare, I was inspired to hear the wisdom of some of the seminarians who have dedicated their lives to reading. We can pick up our phones, which display current and passing trends, or we can pick up a book whose truth has been tried and tested for thousands of years!

If you are struggling with your faith, rest assured there is a book out there that will certainly lift you back up. Just sit down and read one!

“Only God knows the good that can come about by reading one good Catholic book.”- St. John Bosco

“Before beginning to read, raise your mind to the Lord and implore Him to guide your mind Himself, to speak to your heart and move your will.” – St. Padre Pio

“Don’t neglect your spiritual reading. Reading has made many saints.” – St. Josemaria Escriva.